KOMOS A young Satyr boy (satyriskos) who became the cup-bearer of the god Dionysos (in a role similar to that of Zeus' Ganymedes). He was the demi-god of festive banquets.

AMPELOS A young Satyr boy (satyriskos) who was loved by the god Dionysos. When he was gored to death by a bull, Dionysos transformed him into the first grape-vine.

One of these names would be great for my new satyr boy BJD, I am just not sure which I like best.
He now has his own hair and the legs are mostly done (upper leg area has issues because of movement so I have to rethink how to paint them). Horns need painted but are ok for now. Still trying to figure out how to give him bigger pointed ears, but for now he is presentable. I adore him, he is so cute.

Any votes for either name will be appreciated.

Art Done and Not Done

I had several things I planned to get done this week, not many got done. Due to neck/shoulder pain and the weird reaction to the muscle relaxers I was prescribed I have lost at least 2 days. So I did get a new logo done for a small game company but I will not be posting the finished logo until they start using it. I have 2 coronets and a Japanese style picture commission that I had planned to have done or started this week, but none of them got done or even started. Anyway, hope I can get these done by the end of next week.
Posted by Tristan Alexander at 9:56 PM 1 comment:

I now have a satyr BJD that I love. He started life as a girl, like the last one, but is now all boy! His horns need painted, his legs still need more work and he is wearing barrowed hair, but I am happy with him and am glad I found him on https://www.facebook.com/groups/BJDADOPTION/
He is a modified Soom Glot or Glati (not sure which one of the pair). I may still try to give him more pointed ears, but over all I am happy with how he is coming out. He is about 11 inches tall and I still need a name for him. 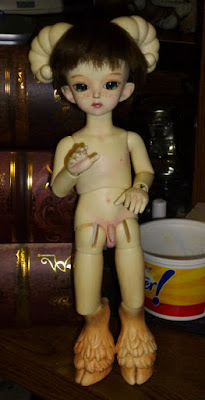 Posted by Tristan Alexander at 11:23 PM No comments:

I was commissioned this year at Pennsic to do a coronet with trees on it. The person it is for has a gold tree on his Arms and his colors are black, gold and green. The stones I had in green I at first was not all the fond of, but seeing them in this coronet and seeing how close to Peridot they are, I now like them a lot. This came out a bit different than I expected but it is a very spiffy looking coronet in my opinion. Just a bit of Celtic and slightly Elvish in look. Leather, Acrylic metallic gold and glass stones, 23 3/4 x 2 1/2.  33

Posted by Tristan Alexander at 3:30 PM No comments:

Lots of Pain and New Stuff

Somehow at Pennsic I must have slipped a disc in my neck or pinched a nerve or something because for the last 2 days of war and for the 2 weeks since, I have been in serious pain! I have an appointment with my Dr. next Tuesday! Can't sleep, feel like I am going to throw up...still trying to get stuff done.

I have 3 coronet commissions to do, one I got just before Pennsic and 2 I got at Pennsic. Here is the flat version of the first one to get done. It is now together and almost finished and I will post pics of it in a day or 2. I loved the idea of this and it came out different than I had envisioned but I still think it is a very cool design. "Golden Trees Coronet WIP". 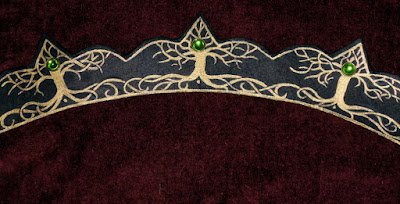 Posted by Tristan Alexander at 1:10 AM No comments:

At Pennsic a lady said something I really liked and think should be on bumper stickers and online! "To many Chimps, Not enough Bonobos"! If you don't understand look up both Chimp and Bonobo, it should be self explanatory.
Posted by Tristan Alexander at 3:33 PM 1 comment:

I now have my camera working again and so can post the pictures of my new BJD. He is a Fox Boy who was originally dressed as a girl and was non sexed but now is a boy. I am not sure of his name yet but I am leaning towards Dionysus. The God Dionysus was raised for the first part of his life as a girl and it seems appropriate that my boy be named after him. I have a small fox tale for him that needs some work to be added, it is not quite the right color and needs wiring so he can wear it. He is about 11 inches tall and started life as a Luts Honey Delf WAFFLE FOX-Little Prince. 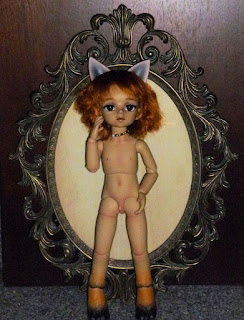 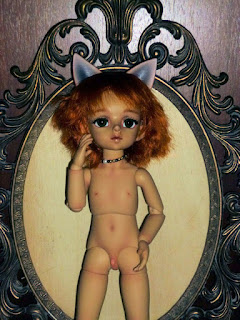 Posted by Tristan Alexander at 12:47 PM No comments: