This is the response I got to a letter to my State delegate about supporting same sex marriage in Maryland;

January 31, 2012
Dear Mr. Alexander,
Thank you for contacting me about your support of the proposed same-sex marriage legislation.
I really appreciate you contacting me and your perspective on this issue, but I have to respectfully disagree.
If you would like to discuss this issue further please do not hesitate to contact me at 410.841.3070 or email at Justin.Ready@house.state.md.us.

This is my response;


Mr. Ready,
I am 55, I am a cancer survivor and my husband and I will celebrate 28 years together this year!

What is your reason for denying us the right to legally marry? If you say "marriage ha always been one man one woman" You are ignorant of the Bible that you use to discriminate against me with! I have studied for the
ministry and know the bible well. Biblically there is NO reference to one man one woman! There are many places where Patriarchs and heroes of the bible are shown to have multiple wives! Fundamentalists like to interpret the bible as saying one man one woman, but it clearly never says that AND clearly says multiple wives was the norm!

I know that nothing I say will change your view since you are a Republican and reason and logic makes no impact on you. But I had to try!

This should be the next to the last picture before it is done. I may not post another one till the calligraphy is done. This is all but finished, some of the gold leafing still needs touched up and some outlines need to be redone. So sorry it is taking so long, but at least I am working on something I need to get done! 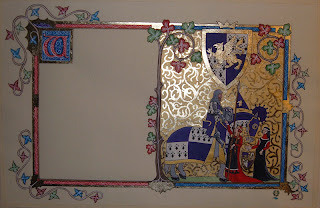 Posted by Tristan Alexander at 5:18 PM No comments:

Nearly done, just some cleaning up of some gold and finishing the capital. Then the calligraphy will be all that needs done! 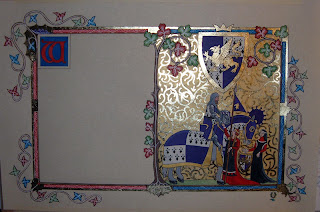 Posted by Tristan Alexander at 12:43 AM No comments:

I had hoped to be done with all the gold today, but it didn't happen. If I had not put so much into it, I would start over and NOT use gold leaf! I hope to have the whole thing done (except the calligraphy) by the weekend. 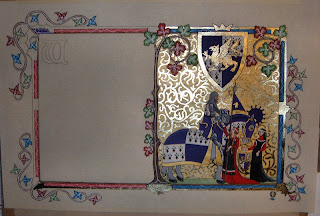 Posted by Tristan Alexander at 11:14 PM No comments:

Have I mentioned that I HATE gold leafing? 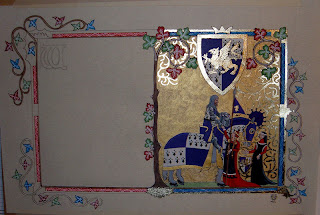 Wonderful ancient Dragon scroll...someday I will try and do something like this!

I had planed to post this last night but the memory card for my camera and my computer don't always work together. So here is the little bit I got done yesterday. 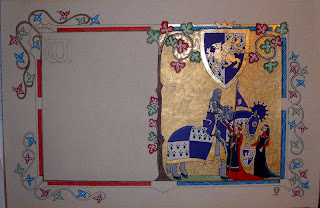 Posted by Tristan Alexander at 1:21 PM No comments:

As I said earlier, I hate gold leafing!! Here is what is done so far with the gold and the last I will be doing tonight! 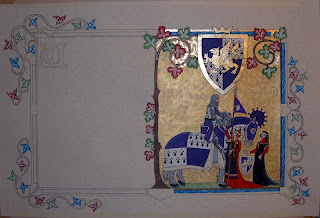 Posted by Tristan Alexander at 10:53 PM No comments:

Just another picture of the "room" I set up for my BJD (who still needs a name). This shows his new Japanese lanterns. 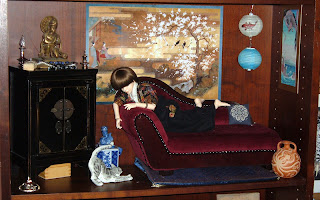 The next post will have the update of the scroll have been working on and it will have some gold leafing on it! I HATE gold leafing! It is a paint and I am never happy with the final outcome! I should have just used gold paint!
Posted by Tristan Alexander at 5:19 PM No comments:

I did not get as much done today as I had hoped. Also I am not real happy with my white work, but I hope when it is all done it will look ok! 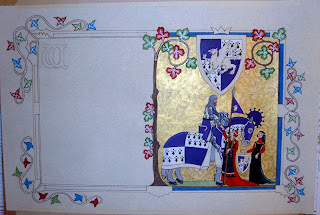 Posted by Tristan Alexander at 12:25 AM No comments:

I recently got a new business  card printed and I don't think I posted it here. So here is my latest business card using an old picture that I still love. "Little Bat business card". 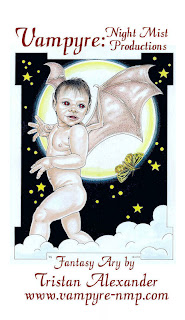 Posted by Tristan Alexander at 12:00 AM No comments:

This is where it was at when I went to bed last night. All the colored leaves will have white work so will look allot different when finished. This is Acrylic on velum (animal skin) and will have gold leaf soon. 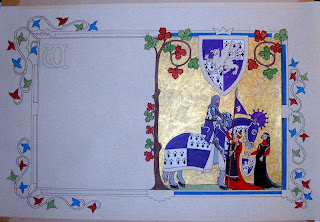 Posted by Tristan Alexander at 9:08 AM No comments:

So far today, this is what has been done. I should have done the gold leafing first...but I never work in the right order. The colors look a bit Christmasy to me right now, but there will be blue and red and lots of gold, so I suspect it won't look like Christmas when I am done. The purple all will get another coat so will be smother. 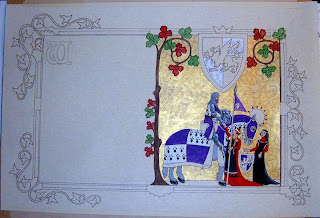 Here is the next step in the scroll I am doing. This is all the inked design (I may still add some stuff) and the ground for the diapering on the background. The design on the background will have gold leaf as will much of the Arms and some of the border. 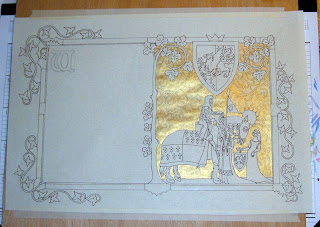 Posted by Tristan Alexander at 4:14 PM No comments:

I just moved my BJD into a new "room", it is actually a shelf on a book shelf (well space for 2 really). I am still working on adding little things. Still need to find a lamp for him. If I had allot more room it turns out I actually have many many great items that are the right scale for him... Anyway, still need a name for him and still working on getting his a "little brother". Miniature stuff is SO much fun! I have always love tiny things and miniature versions of larger things, so this is becoming an enjoyable hobby! 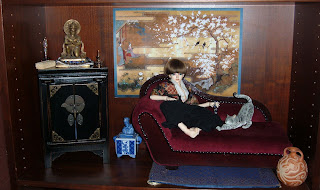 I asked for a half mask from this merchant for Christmas and got it (the full mask is all she seems to have now so the one I got is not shown) http://missmonster.myshopify.com/ It was a blank, unpainted mask and this is what I did with it! 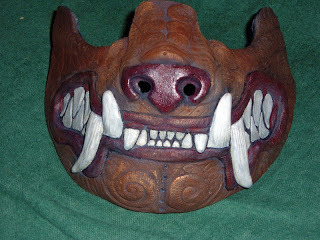 I am working on a scroll for a friend. It is based on a sketch he did (which was very good) and I basically just translated and added to what he had done but on a real piece of velum (animal skin). 19 x 13 based on the Luttrel Psalter. 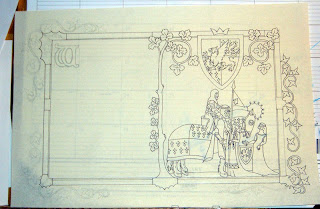 Woops I Did It Again!

So here is yet another picture I should not have spent time on. The original was also by a person on Fur Affinity. Here is a link to the original picture http://www.furaffinity.net/view/7166045/ I just loved the pose and really wanted to see it in color...and then I got carried away. So here is "Snow Leopard Gryffon", 8 1/2 x 11, Acrylic, Micron marker, Copic marker enhanced hand colored print. Original and prints for sale. Picture 2. 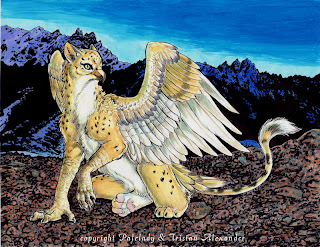 Posted by Tristan Alexander at 10:41 PM No comments:

Failing to Do What I Should

Here I am coloring the work of someone else, cause it appealed to me and they said I could. I should be doing any number of projects (many already paid for) but I do this instead. I hope the next post will be something I am supposed to be doing! This is the original and artist who did this lovely dragon http://www.furaffinity.net/view/7153772/  And here is my version, "Stippled Dragon color", 8 1/2 x 11 hand colored print, Acrylic, Copic marker and Prisma Colors. The colors are a bit off  in the scan, the yellow is much stronger on the original. Original and prints for sale if the artist of the black and white say I can. 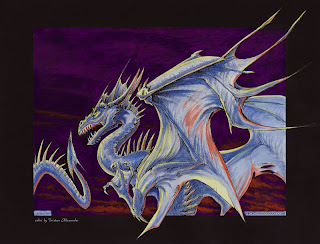 This is my newest picture but was started over 10 years ago. I did the sketch and had it mostly done but had never finished it or started inking it until yesterday. Simple and my first black and white stipple work in a while as well. "Summer Soak", 5 1/2 x not quite 10, Micron marker on Bristol. Original and prints for sale. Picture 1. 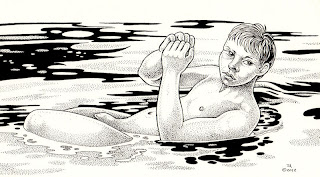