Guess No One Reads This Now!

I was off line for 9 days and not only did no one seem to notice but the art I posted last has gotten NO comments! Ah well, guess I will still post if only to keep track for my self of  my work.
Posted by Tristan Alexander at 3:01 PM 1 comment:

Well my computer died last week and it has taken awhile till I got a new one. I still have few functions set up and it may be a few more days till I can post any art, but hopefully I will have everything back up and running by the end of next week.
Posted by Tristan Alexander at 12:54 PM No comments:

This is an SCA Award of Arms scroll that I owed Randvar for some time. He has a Viking persona and it took me a long time to figure out what to do. I really hope he likes this...it is a bit different. I tried to basically paint a rune stone. 8 1/2 x 11, Acrylic on Canson board. Picture 6. 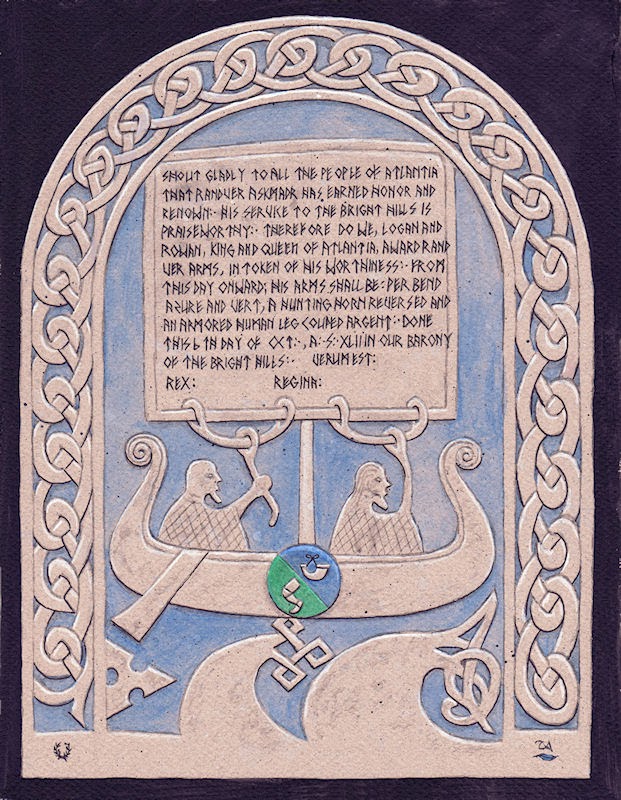 Posted by Tristan Alexander at 10:11 PM No comments:

I enjoyed doing the landscape with airship on the clock that I decided to do another small one similar to it. I had the idea to put a faerie on the side of the airship and I hope it works for others. I like it myself. "Flight of the Faerie Queen", 9 1/2 x 8 1/2, Acrylic and watercolor colored pencil on Canson board. Original and prints for sale. Picture 5. 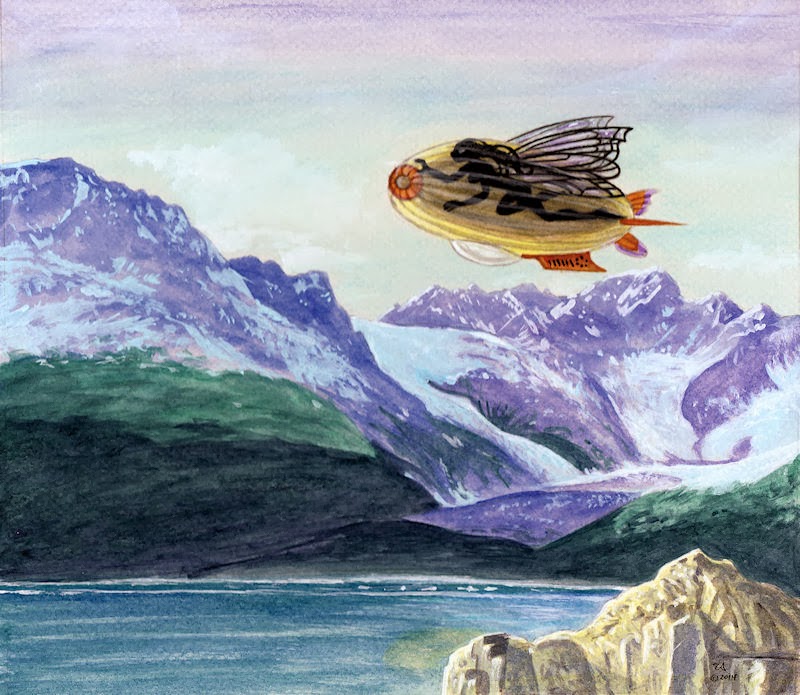 Posted by Tristan Alexander at 11:40 PM No comments:

OK, so here is the full Steampunk clock (this goes in the frame shown earlier with the two section painted matt). This is 12 x 21 overall. The upper clock face painted area is about 9 x 11, and the lower landscape is 9 1/2 x 8. It is all Acrylic and Micron pen on Canson board, "Tempus Fugit/ Morning Mist". SOLD.  Prints available. Picture 4. 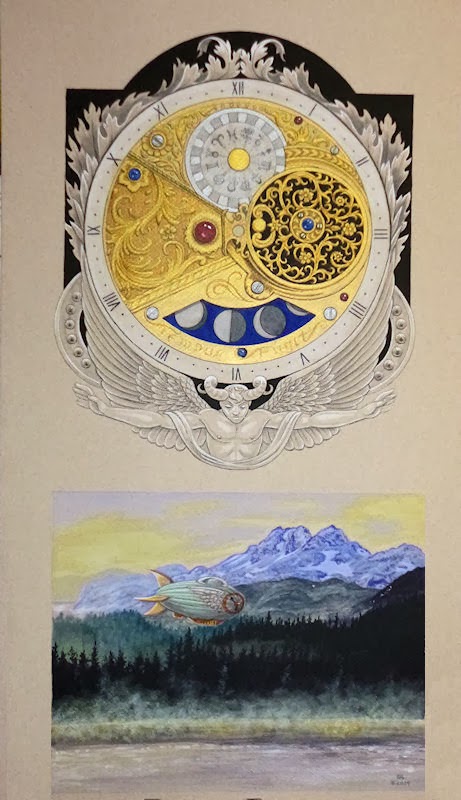 Posted by Tristan Alexander at 7:53 PM No comments:

No, not that kind of bottom! This is the picture under the clock part I posted earlier. I will post the whole thing with size etc after this. "Tempus Fugit/Morning Mist". 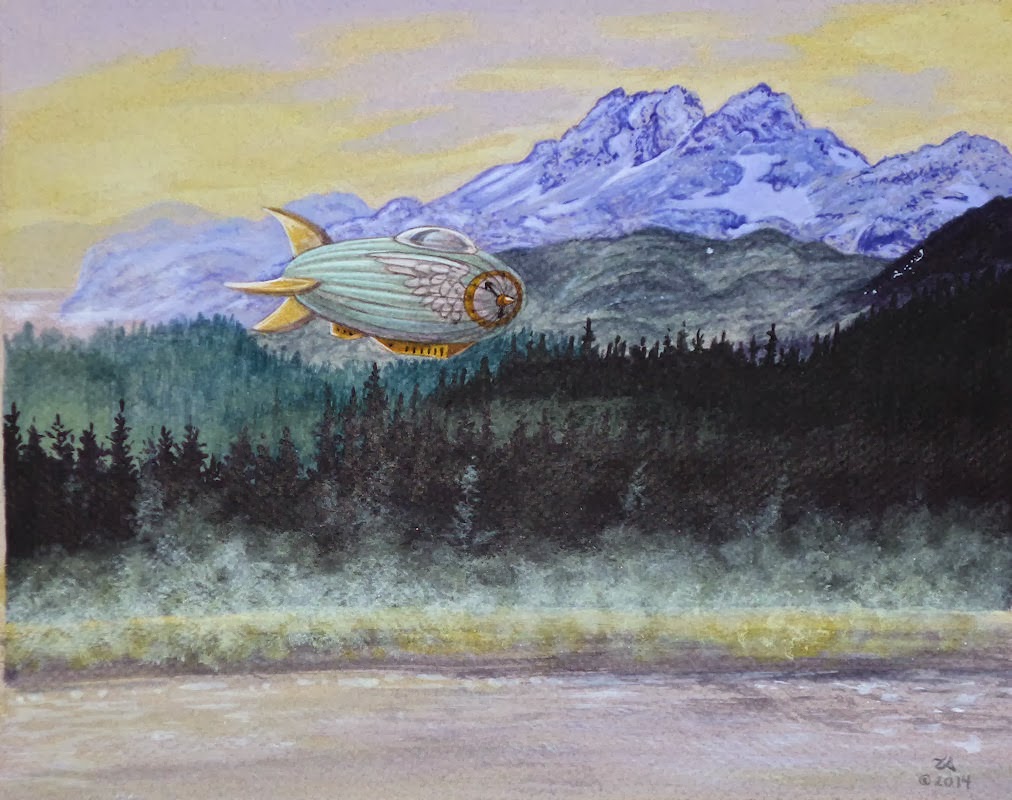 Posted by Tristan Alexander at 7:47 PM No comments:

So, since I have lost a couple of my artists for my shop "The Magic Mirror" at Pennsic I need some new blood! If anyone knows of any artists in the SCA (or who would like to attend Pennsic in the future) and would like a place to sell their work and hang out, please have them contact me. The art can be period based or complete Fantasy, we have had all kinds over the years!
Since Pennsic is in Aug. this should give people enough time to consider and prepare.
Thanks
http://en.wikipedia.org/wiki/Pennsic_War
Posted by Tristan Alexander at 12:25 PM No comments:

Here is the upper part of the Steampunk Clock I am doing (still needs the clock hands part). This is mostly metallic gold Acrylic and silver. The next part is the scenic picture I plan for the bottom half of the clock. Once done I can do prints of the upper part and lower part separately if I wish. 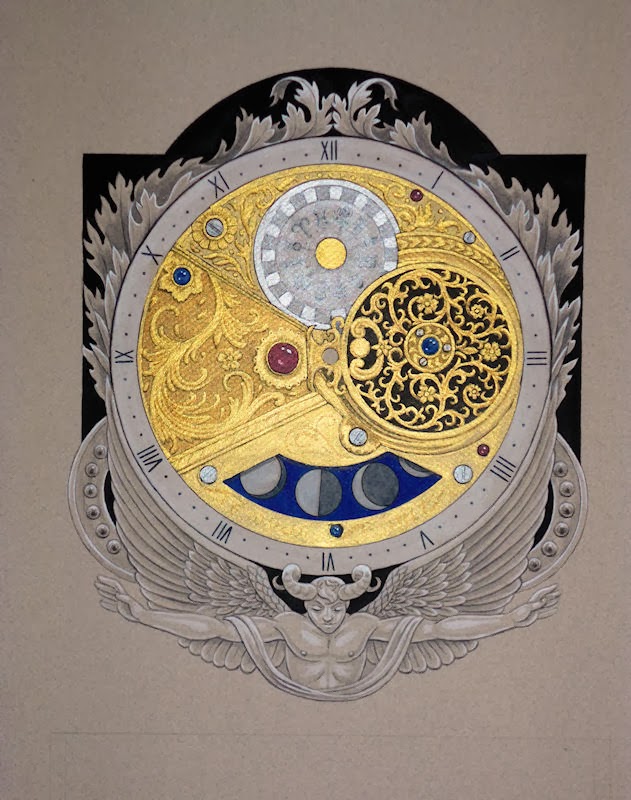 Here is a next step in the Steampunk clock design. I am still working out what to do with that upper non gold circle...several ideas but I have not settled on what it will be yet. The figure at the bottom and the border area are still in flux..not sure if they will stay as is or be colored somehow. When this is done it will have working clock hands and a mechanism to make it a functional clock.
The bottom picture is the frame I am doing this to fit in. The "matt" is painted on the glass and the detailed work around the clock face will be partially obscured once in the frame. I plan a Steampunk landscape with airship for the bottom section. 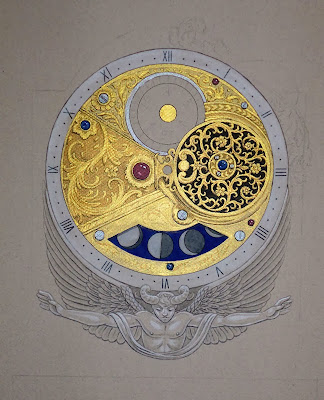 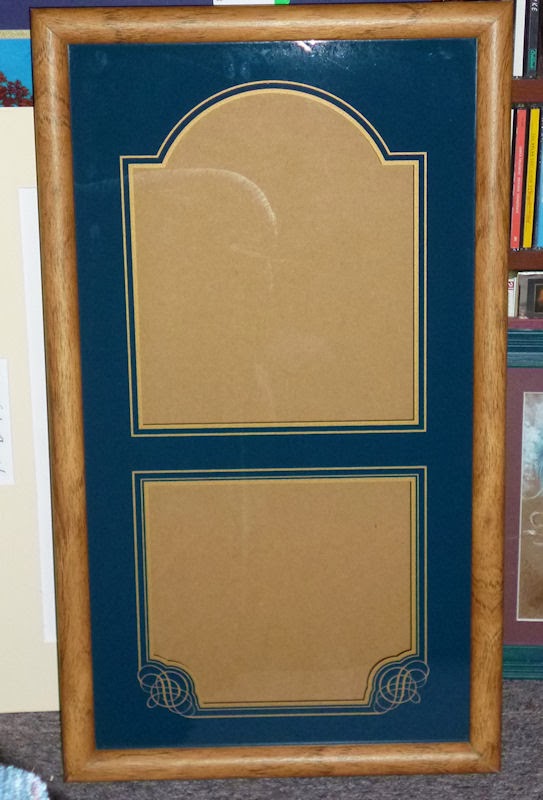 Posted by Tristan Alexander at 11:56 AM No comments:

I won't go into details right now but I am doing a picture/clock and trying to make it steampunky...I really like what I have done so far even though there is allot left on this. It is metallic gold and silver mostly right now. I will give more details as it progresses. 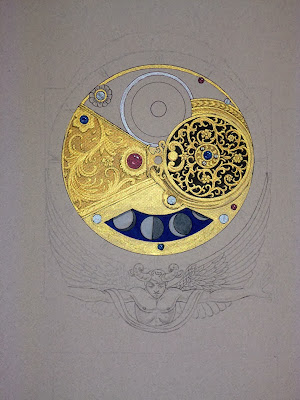 Posted by Tristan Alexander at 12:13 AM 4 comments:

I get very few pictures of my grandson but thanks to his grandmother I get some. This one is not great quality but it is very sweet, it shows Logan and his mommy sleeping. 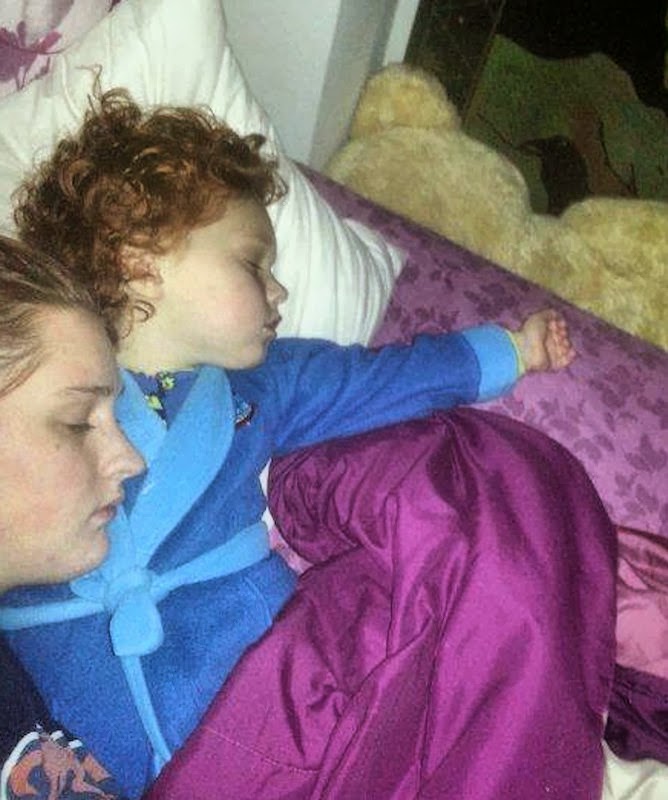 Posted by Tristan Alexander at 11:56 PM No comments:

In the SCA (www.sca.org) the Order of the Pelican is the highest award one can earn for service. Someone who I know has busted his but and has earned this honor will be elevated to this Order in February and I had the honor of making the medallion for him. But, since I can never leave well enough alone, I made two and his Lady wife picked the one she thought he would like best. I also beaded the necklace. The first of these is about 1 1/2 inches round, paper under glass, Micron marker and Acrylic. The second is Micron marker and Acrylic on a 1 1/2 inch wooden round. Both will be set in a metal ring/locket. The beading is dark blue and gold (the picture does not show the colors well). Picture 2 and 3. 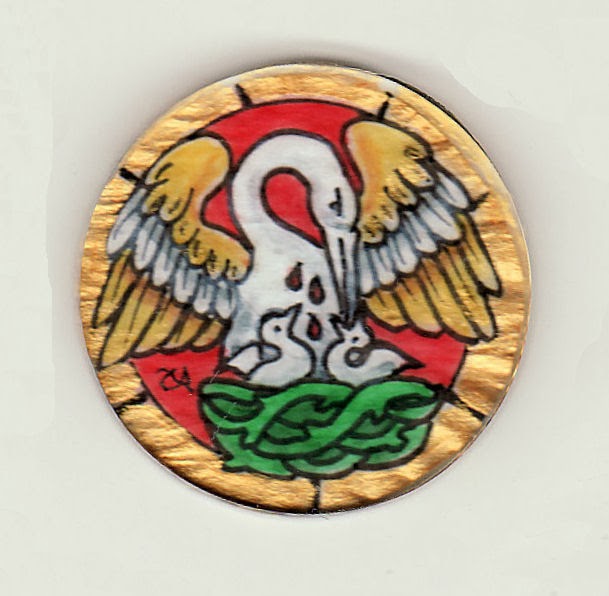 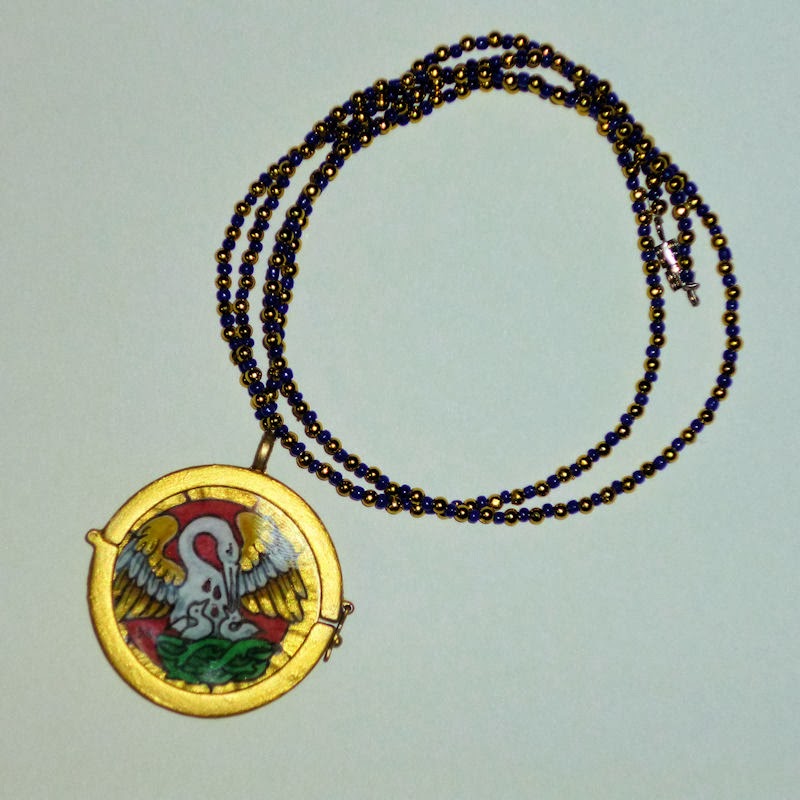 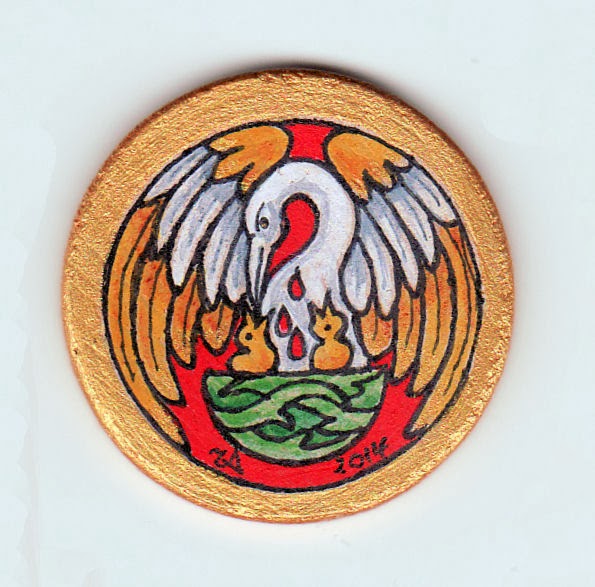 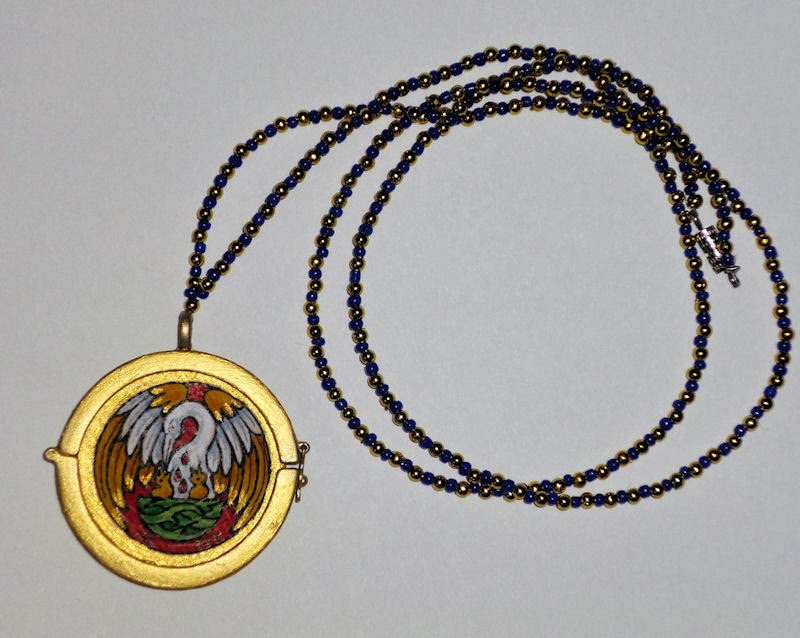 I think this is finally finished. "Cat Boy" is 15 x 20, Acrylic and ProWhite on Canson board. This was commissioned by the boy in the picture (his mom payed for it), he specified he wanted to have cheetah markings and cat like back legs, and eagle wings with markings to go with the cheetah. He also asked for a forest/jungle at night as the background. (The photo is taken in indoor light and so colors are off from the original).  I really hope he likes it. Picture 1. 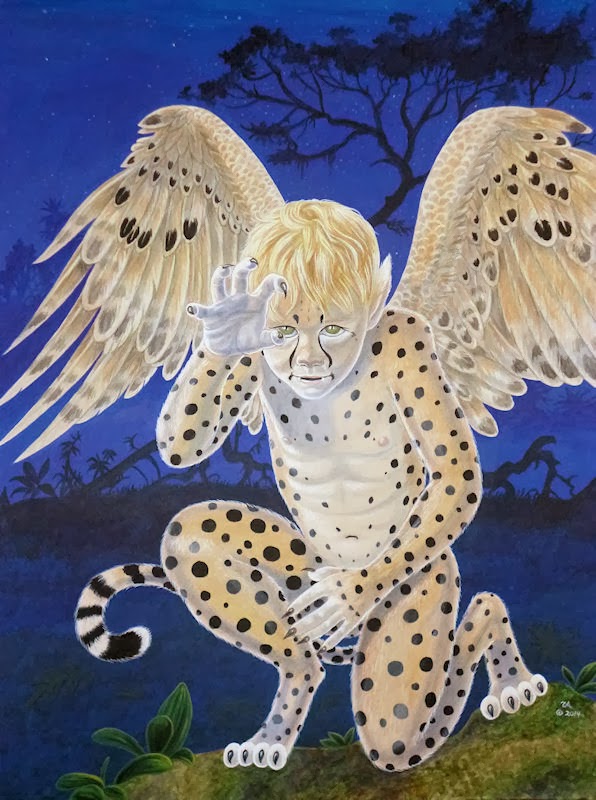 This is the photo of the boy I am doing the cat boy picture for and of...his mother is happy with the painting so far and so I hope I caught a likeness (not easy when you add the cheetah markings). 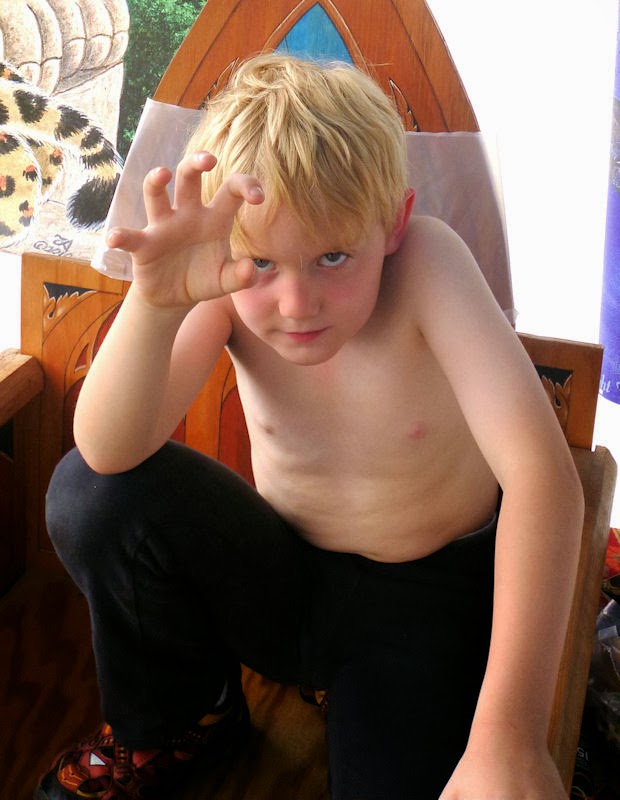 Posted by Tristan Alexander at 10:47 AM No comments:

I now have the background in and am almost done with this commission. 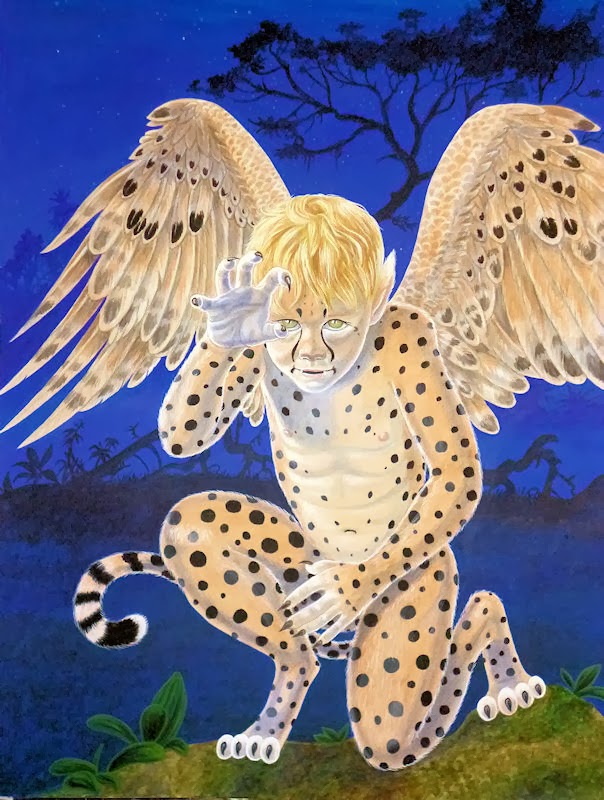 This guy does some very nice work so I wanted to be sure I had him linked and wanted to share his work.
Posted by Tristan Alexander at 5:17 PM No comments:

OK, Don says he think it is a software not a hardware problem (I guess that means no new computer needed to fix it). So I have ordered the new BJD from Fairyland. He will be the same size as Trevi but is an elf! So YEAH!!
Posted by Tristan Alexander at 7:40 PM No comments:

Towleroad reports AMC will be screening a movie by the anti-gay group Focus on the Family.

May 6, 2014, AMC theaters across the U.S. will be showing a one-time screening of Focus On The Family’s Irreplaceable as a part of their Fathom Events program. The documentary film follows one man who believes in traditional marriage and family as he consults with various “experts” - like anti-gay Rabbi Shmuel Goldin, ex-gay advocate Dr. Miriam Grossman, and Prop 8 supporter Michael Medved - to determine if his traditional marriage is “meaningful or outdated.”
Focus on the Family is the group that claims Gay marriage will “humiliate” children. Former members admit to doing harm because of FOTF. Tried to legalize anti-gay discrimination.
Direct link to news: http://tinyurl.com/mch29mw

We just saw the Second Hobbit movie and there was a trailer for this Homophobic anti gay rights "movie"...I almost went to ask for the manager to complain but figured it would do no good. I think ignoring these bigots is better than giving them any publicity. I posted this here just so people can be aware!
Posted by Tristan Alexander at 10:39 AM No comments: