"It is estimated that between 5,000 and 15,000 gay men were detained in concentration camps under the Nazi regime, persecuted under Paragraph 175 of the German Criminal Code, which proscribed sexual acts between men. (In total, between 1933 and 1945, around 100,000 men were arrested under Paragraph 175, half of whom were sentenced.) While the Gestapo directive expanding incarceration beyond regular prisons was issued on April 4, 1938, gay men were among the first victims of the Holocaust to be rounded up and interned in concentration camps starting in 1933."

(And when the Allied forces liberated the camps, they did NOT liberate the gays, they LEFT THEM in the camps)!!


The cry of "Never Again" is a powerful one, but with our current President and Congress, we are headed for this same horror! Jews will not be the main target, but I am sure they will be included by the White Supremacists who want this to be a straight, white, male, Christian Nation and are already starting to make laws to make it so!

Posted by Tristan Alexander at 2:00 PM No comments:

Well, the Elric picture is not going anyplace right now, mostly because I have a coronet and a knighting scroll to do, both with deadlines. Once they are done I will get back to the Elric picture. This year is starting off very slow on art getting done.
Posted by Tristan Alexander at 1:24 AM No comments:

I had hoped to have this done way before now but being me, I just have to make it more complicated than it maybe needs to be. Anyway, still a lot to do on it and I have no idea of the name it will have. But Elric is one of my all time favorite characters and I had not done a picture of him in a while. And it just feels like 2017 ids a year we will need an incarnation of the Eternal Champion, since the balance is definitely out of whack! Almost 15 x 8, all the usual stuff on the usual board. 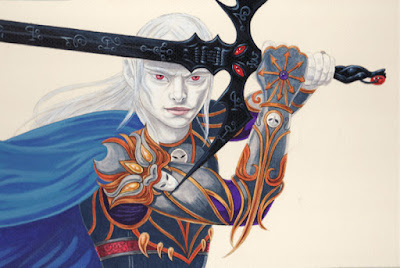