I will not be posting for the next 2 weeks. Hubby will be home but he doesn't post on my Weble.
So, later!
Posted by Tristan Alexander at 11:37 PM No comments:

I thought, since I have nothing else to post and don't think I have shown off the leather coronets on here before, I would post a few more before leaving for Pennsic. 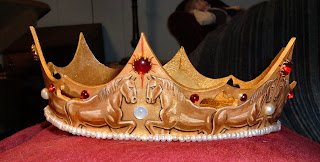 This was commissioned and is one of the more complex coronets I have done. This has allot of cut work, lots of painted detail (12 horses), lots of jewels and real pearls around the base (all sewn in). It is metallic gold Acrylic (with some white and brown for shading). It is about 3 inches tall and 23 inches around.
Posted by Tristan Alexander at 1:54 PM 2 comments: 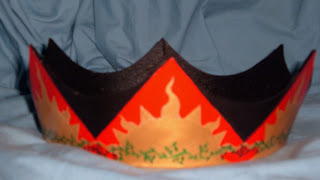 In the SCA (http://www.sca.org/) I do coronets (crowns for Baron and Baroness). This is a blurry picture, but is the latest one I did for a friend who recently became a Court Baroness. This is based on her heraldry.  It is 3 inches tall, 22 inches around, leather painted with acrylic.
Posted by Tristan Alexander at 2:11 PM 2 comments:

This was not where I thought this picture was going but I think I like it. It is based directly on http://www.furaffinity.net/view/4115290/
and is done with permission from her. I hope she likes what I did based on her great drawing! Roughly 9 x 12, Micron marker, Acrylic and Prisma Colors.
Posted by Tristan Alexander at 10:06 PM 2 comments:

I love my husband, he sent me this by email;

Serene Jones, President of Union Theological Seminary in New York City, writes in http://www.huffingtonpost.com/serene-jones/an-open-letter-to-glenn-b_b_650604.html
that she is sending Bibles to Glenn Beck, with the social justice passages marked for him.

I write with exciting news. Bibles are en route to you, even as we speak! Kindly let me explain. On your show, you said that social justice is not in the Bible, anywhere. Oh my, Mr. Beck. At first we were so confused. We couldn't figure out how you could possibly miss this important theme. And then it hit us: maybe you don't have a Bible to read. Let me assure you, this is nothing to be ashamed of. Many people live Bible-less lives. But we want to help out. And so, as I write this, our students are collecting Bibles from across the nation, packing them in boxes, and sending them to your offices. Grandmothers, uncles, children, co-workers -- indeed, Bible-readers from all walks of life have eagerly contributed. They should be arriving early next week, hopefully just in time for your next show. Read them with zeal!

Oh, I almost forgot: we've marked a few of the social justice passages, just in case you can't find them.


Beck is also being offered a scholarship and reduced rate on housing at Union in thanks for his interest and the publicity generated by his show.

One theme that has been jumping out of the psalter for me this week is “equity.” Some people talk as though justice and equality issues facing the Church were some kind of imposition from secular culture, to be treated with suspicion as a post-enlightenment racket.

The insistence of the psalter that God is a God of equity and justice, whose people should strive to reflect these qualities gazumps this whole illusion. If, quoting Michael Ramsey, “The Church exists that Christ may reign,” our life should be characterised not by weird exceptionalism, but intentional striving for equity and justice.


Religion Dispatches comments on the Bible, Beck and James Cone:

In his latest attack on the Social Justice, Glenn Beck slams the work of James H. Cone and Black Liberation Theology. On the surface, what Beck says may be appealing; Cone does make people uncomfortable. With a black man in the White House and talk of a “post-racial” America, who wants to hear about lynching, of all things? Yes, it was horrible, but haven’t we put that behind us? Aren’t people who still want to bring “that” up just trying to stir up trouble? If Beck can somehow prove that Cone is wrong about the gospel—and probably a communist as well—we can dismiss him and feel a whole lot better about ourselves, our country, and our faith. The problem is, the Bible itself sounds more like Cone than Beck.

Endeavor Printing is a great company! I got all my books printed through them with wonderful results. My newest book did not come our right but they are working with me to fix it and I can't say how much I appreciate it!

I encourage any artist who might think books of their work would be nice to have or would sell well, to check out this company. They do very high quality work at reasonable prices and will work with you if you want something different than what is shown on their site as standard amounts etc. 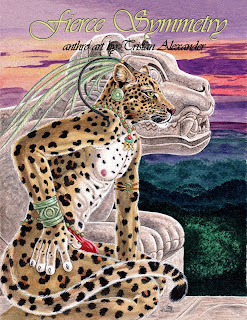 I had to redo my cover for "Fierce Symmetry" just a bit, here is the new cover.
Posted by Tristan Alexander at 10:47 AM No comments:

Richard Fouchaux; Okay then, Thomas Paine was a Deist:

"... I do not believe in the creed professed by the Jewish Church, by the Roman Church, by the Greek Church, by the Turkish Church, by the Protestant Church, nor by any church that I know of. My own mind is my own church. (Richard Emery Roberts, ed. "Excerpts from The Age of ... See MoreReason". Selected Writings of Thomas Paine. New York: Everbody's Vacation Publishing Co., 1945, p. 362)

John Adams, the second U.S. President rejected the Trinity, the deity of Christ, and became a Unitarian (Nettelhorst, http://www.theology.edu/journal/volume2/ushistor.htm). Adams:

Not a Founder, Grant was just stating what everyone knew to be the truth in 1875:

Ulysses S. Grant, in his seventh annual address (State of the Union address) to the Congress, December 7, 1875:

"... As this will be the last annual message which I shall have the honor of transmitting to Congress before my successor is chosen, I will repeat or recapitulate the questions which I deem of vital importance which may be legislated upon and settled at this session:

First. That the States shall be required to afford the opportunity of a good common-school education to every child within their limits.

Second. No sectarian tenets shall ever be taught in any school supported in whole or in part by the State, nation, or by the proceeds of any tax levied upon any community... "

"... Third. Declare church and state forever separate and distinct, but each free within their proper spheres; and that all church property shall bear its own proportion of taxation (emphasis added). (A Compilation of the Messages and Papers of the Presidents. Vol. X. New York: Bureau of National Literature, Inc., 1897, p. 4310)
Posted by Tristan Alexander at 3:03 PM No comments:

Well, after trying to get two of the moderators of FurAffinity to help me, I was finally told "No, there is no way to delete your page from the site". Apparently the only thing I can do if I want to really be GONE from FA is to delete every single entry and bit of information one by one! I just wonder, what is someone really ticks them off and the owners want someone gone? Do they have to just leave all that persons stuff up? Do they have to delete everything one by one themselves? This seems like a lie to me, I mean, don't most sites have some way to delete stuff without doing it entry by entry?

Oh, well, Saturday or Sunday I will either reconnect to FA and consider staying or I will start deleting stuff! That will be a lot of work...so I guess I have to decide if it is worth this added pain in the butt from this site or if the trouble of staying is less annoying.
Posted by Tristan Alexander at 11:19 AM No comments: 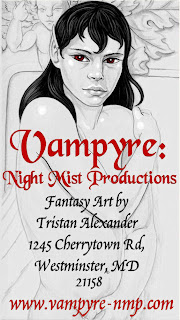 Well my last Buisness card is almost all gone and was very dark, maybe to dark, So I tried several new ideas and this simple light version is what I am going with for a while. So here is my new card, based on a failed sign that I loved parts of but that had problems and got cut up and reperposed.
Posted by Tristan Alexander at 1:15 PM 7 comments: 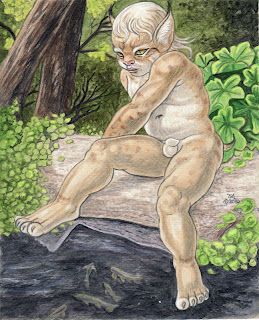 Well I finished the small picture I posted unfinished earlier. "Lynx Boy", 7 x 8 1/2 Acrylic and watercolor colored pencil on Canson board. I think he is cute, most likely won't sell like most of my work, but oh well...at least it's small. Original and prints for sale. Picture 52.
Posted by Tristan Alexander at 9:20 PM No comments: 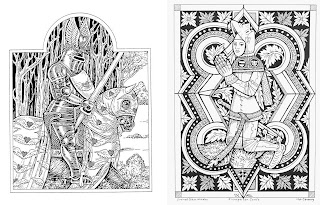 Well, I just learned (2 days ago) that 2 of my pictures which were used as covers for an SCA newsletter have been nominated for this award! Cool! My friends Portia has been nominated a few times and won twice now! Here are the two pictures used as covers that were nominated. "Knight of Love", based on King Rene's Book of Love, and the other is "Stained Glass Knight", based on a window from Germany.
Posted by Tristan Alexander at 4:42 PM No comments: 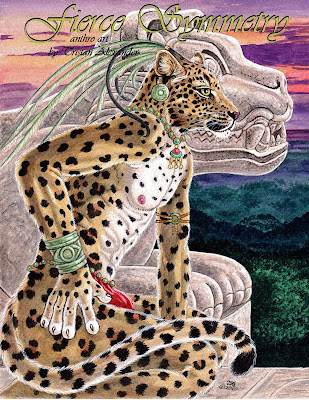 Thanks to input from many (mostly on FurAffinity), it was clear that the second picture in my list was the most popular. As I liked them all I went with the peoples choice. I did change the Title lettering a bit because it was commented that it did not stand out as well as some of the others. So here is what will be the cover for the new anthro book, "Fierce Symmetry".
Posted by Tristan Alexander at 11:03 AM No comments:

Well I guess I will say happy 4th of July! While there are a lot of things wrong with this country, it is great in many ways too. I just hope before I die it gets better and ALL Americans have equal rights! And health care would be nice too.

Anyway, I hope to post new art soon, sorry for the lack of post of late.
Posted by Tristan Alexander at 11:41 PM 2 comments: 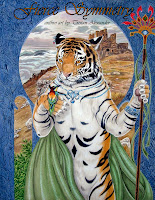 Not that anyone but Pyra has commented on the cover choices, but here is one I missed. Please look at it and see how it compares to the other 4. Which is best?
Posted by Tristan Alexander at 8:04 AM 1 comment:

OK, please help me decide. Vote on the cover you think would look best on my new book.
Posted by Tristan Alexander at 12:52 AM 2 comments: