Finally I have my third picture for this year done, boy I feel like I am way behind as it is already February and I have only done 3 pictures!! The second was the book cover (that I can not show you the finished version of yet because of the agreement with the author).
When I started this it was going to be quick, just something inspired by Valentine's day and the fact I love doing pictures of Eros/Cupid! But it of course took longer than I expected...and it also became more personal. The face ( a variation on the photo reference I used) was suddenly very familiar! I know him and love him and always will, while not a perfect likeness, it is the face of my first love, Terry! The body is more buff than his was, but it is still him! This was not planned but in the past people would ask "who is that guy you are always drawing/painting?" And I would say, "I don't know" cause I was not consciously doing it...but then they would see a picture of Terry and say "AH! That's the guy!" I knew he reset my ideal of beauty when I met him and I know he is in my heart forever but I was not aware that I was paining him by default!
Later, after my son came along, people would say "Who is that boy you are always drawing/painting?" and I would say "I don't know!" Then they would see my son and say "AH! It's him." And once they said it I could see Joe had indeed crept into most of the non particular pictures of children I did! 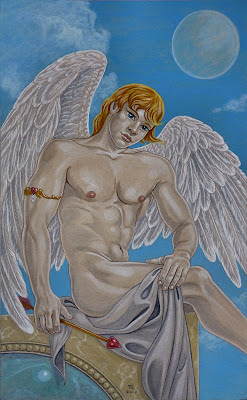 Posted by Tristan Alexander at 1:47 PM