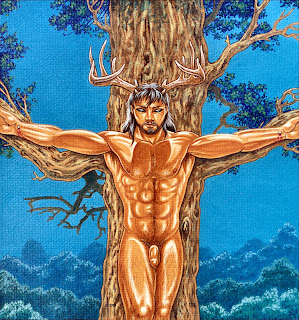 Several years ago I bartered with someone to to make me a banner with my SCA Arms on it and in exchange I would do a picture as payment. She described what she had in mind and it was going to be black and white and I would pay her some cash also to cover the banner cost. Well, after she told me the concept for her picture I just had to do it in color. I did this for her and payed her some cash as well for a lovely banner. I loved the idea she had for the art since it combines pagan and christian symbology. She was both and had this idea to show them mixed. Many people have bought prints of this and it still remains a powerful image to me. "Hern Christos" about 8 x 10, Acrylic on matt board.
Posted by Tristan Alexander at 11:35 AM