(Normally I don't do this, but I found this on another site and found it fascinating!) This Egyptian rock painting was found inside the tomb of Khnumhotep and Niankhkhnum, and dates to some time around 2400 BCE. It depicts the two men holding hands, surrounded by their children - the traditional pose of a married couple. It may well be the oldest piece of art shown depicting a male-male relationship. According to Wikipedia, “the men’s chosen names (both theophorics to the creator-god Khnum) form a linguistic reference to their closeness: Niankhkhnum means “joined to life” and Khnumhotep means “joined to the blessed state of the dead’”, and together the names can be translated as “joined in life and joined in death.” And just as a kicker: the two both held the title of Overseer of the Manicurists in the Palace of King Niuserre. 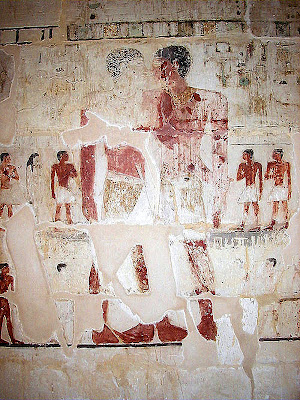 Posted by Tristan Alexander at 12:41 PM