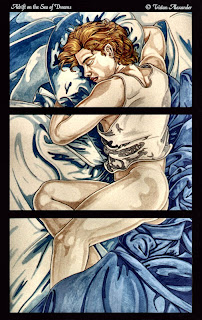 I started a picture on a scrap piece of illustration board and then found that what I had drawn looked great but really needed to be longer to make it look it's best. I had no larger pieces of illustration board and did not want to try to redraw the picture anyway (I hate trying to do something over it never comes out right for me). So I found a smaller scape of illustration board that would make the picture about 1/3rd larger. I stuck it up against the bottom of the picture, drew the rest of the figure and background continuing from my original piece, and it was perfect. Now I had the dilemma of how to make this look like one picture. Gluing or taping the smaller bottom part to the rest was not going to work. First I painted and finished the picture, then I decided to cut the larger top 2/3rds in half. After I did that, I laid all 3 parts on a slightly larger piece of black mat board and left an equal space between each part. I liked it so I glued them down, matted the whole thing and I think it sold it's first time being shown at a convention. This was many years ago, but I was very pleased with the end result and may have to intentionally do this for a picture. The effect is somewhat stained glass (partly my stylization of the cloth and figure and partly the black bands). So here is "Adrift on the Sea of Dreams" I am guessing it was about 8 x 16 . I did scan the inked picture before it was painted and mounted and took out the line between the parts. I have a hand colored print version like that but it doesn't have the same feel or charm as the original.
Posted by Tristan Alexander at 2:09 PM