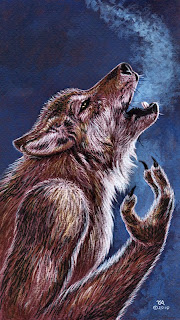 This is named for the fact that I was trying out how Copic markers worked on the darker Canson board...not real good. I had a small scrap of 5 x not quite 9, red/brown board and started with the idea of doing a simple wolf head. Again, not so good! The proportions are off (I know most would not notice, but IT is off...). So, it became more werewolf and got the name "Experiment #4". Don't ask why number 4, it was just what came to mind.
It was done mostly while setting in a church (not attending service but waiting on my husband who was at the service), so it didn't cut into commission work time.
I ended up adding allot of Acrylic so you will never figure out what was the Copic marker and what was something else. For a small quick picture, it's OK. Original for sale, $30. Picture 16.
Posted by Tristan Alexander at 8:48 PM