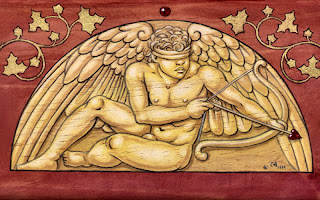 Gee, I was going to post something about the TRUE origin of this holiday and I looked online and find all these nasty Christian, anti everything versions of the history. Of course, I learned way back when, that Valentine's day was originally a "pagan" holiday of fertility and people had lots of sex and it was fun! Then when the Christians came along they stole most of the pagan holidays and made up "saints" to have as the reason for the festival. Of course they took the sex out and tried to make it about "pure chaste love"! But some symbols stayed with it over the years in spite of what the Christians wanted. Cupid, Roman god of love, though reduced to a chubby baby in most cases, still remained the main symbol. The "heart" was also a continued symbol. Thanks to the mid 90's TV show "Cybill" (which we found extremely funny and I still miss), I can never look at a stylised Valentine style "heart" and see it the same. They made a good point/argument that the shape is NOT really a heart shape but the female sex organ!
After saying all this I hope the few who read this have a great Valentine's day and have that special someone in their lives as I do.
"Blind Cupid Box", 6 x 11 (box top as far as I can remember), Acrylic and enamel on wood. Original donated to an AIDs charity auction!
Posted by Tristan Alexander at 8:37 AM