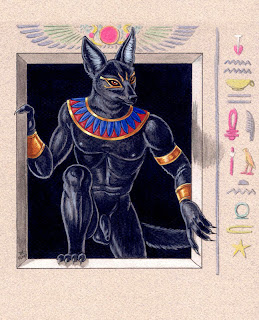 I have long been a fan of the Egyptians and their many Gods (Jewish captivity and 10 commandments aside). Anubis has been one of my top favorites and until 2007 I did not know (as I have discovered many didn't) that I was using the wrong name. Anubis, is the Greek name of an Egyptian God. Anpu is one of the more correct names for this God (there are about 3 possible names better and more accurate than Anubis, but I like Anpu best).
Most representations of Anubis/Anupu are really a priest in a mask, acting as the God. Here I did Anpu as himself NOT as someone in a mask. The hieroglyphics are real and are part of the summoning or inviting Anpu to come and judge the dead. In Egyptian tombs, they would have a fake or painted door for him to come through. That is what this picture shows.
I think it was about 8 1/2 x 11 , Acrylic and watercolor colored pencil on Canson board. "Anpu Rising"
Posted by Tristan Alexander at 12:34 PM