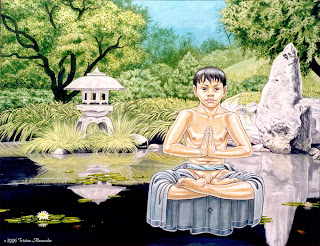 This is one of my all time favorite pictures. It is one of those pictures that goes beyond my normal ability. It lives in Japan (with the folding screen). It was bought by my friend Philip for his boyfriend (who is Japanese) and was my first picture to go to Japan. This picture also was the victim of a vandal during it's first showing at a convention. Someone took a marker and defaced it and another picture of mine. The people at the con were all supportive and the art show paid for the art and gave it back to me to fix if I could. Thankfully someone who did art conservation gave me some tips and I was able to repair the damage (I can still see where it was fixed, but it really is almost as good as new). The other picture, while repaired just did not repair as well and is still scarred in my opinion. After that I started putting everything under plastic and now everything is framed under glass, so this won't easily happen again.
Another friend says this picture is not Fantasy or Sci Fi, it is Zen! I like that. "Floating Lotus" 16 x 20, Acrylic and watercolor colored pencil on Canson board.
Posted by Tristan Alexander at 4:23 PM