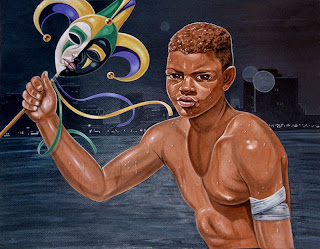 After Katrina hit New Orleans I thought I would do a picture to sell and give the proceeds to some charity to help the people there. It was 2 years later that I finished this picture. I finally sold it at a convention last year but did not give any money to anyone. It seems that the idea of doing art to raise money just didn't work as I had hoped. Also with all the problems and trouble of the different groups "helping" after the storm, I had no clue who to send it to.
This is about 16 x 20 on Canson board in acrylics, watercolor colored pencil and Prisma color. I wish I could have gotten a better scan/picture of it but this is about the best I could get. I may play with it some on the computer and try to clean it up more but that is not something I am very good at.
"New Orleans Defiant"
Posted by Tristan Alexander at 11:47 PM