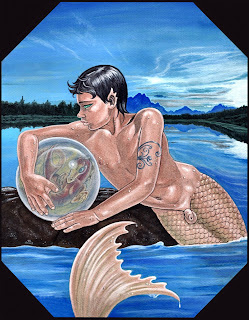 This was done for the second of the unique shaped frames I found at Good Will. This time I decided to do the work vertical instead of horizontal. Most of my art just happens! I almost never have a clear idea of what I am going to paint before I start. Most often I have a photo that parks some idea or that has lighting or a face or a pose I like and my art grows from that. In this case the whole central part of the "story" of the picture and the title feature itself came last. I had the pose and even found a great picture that inspired the background but even after all that I had NO idea what he was holding! I tried many ideas and finally it hit me. I did the baby Leviathan and then encased him in the egg. While many of the details were obscured once I added the clear egg shell, it made it work how it had to. His armband and the drops of water are some of my favorite details in this one. The same size as "Dragon Hunter", on Canson board in Acrylic and watercolor colored pencil. "Leviathan's Egg"
Posted by Tristan Alexander at 10:08 AM