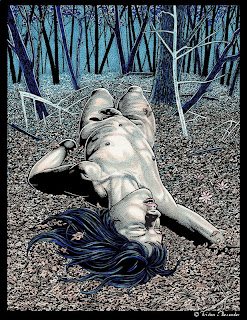 (Copyright Tristan Alexander all rights reserved)
(Shadows continued)
When Joshua calmed down a few minutes latter, Valantene continued his story. "Many of the older and wiser people of my Clan knew what Lord Mihnea had become and were prepared to protect us all from his curse. I however, would not believe that this man who gave me such pleasure and treated me so well would ever do me harm. The elders put garlic and hawthorn boughs all around the doors and windows of our homes. This would keep the Wurwolaka from entering.

For three nights I lay waiting for my Lord to come and pleasure me as he had almost every night for two weeks. On the fourth night I heard him call to me, the call was not in my ears but in my mind. I do not remember rising or walking into the woods but I found myself standing before Lord Mihnea, naked, surrounded by the dark forest. As I looked into those red tinted eyes, my young member stiffened and pointed to the sky. Seeing my aroused state, this strange Lord knelt and again suckled from my body. Unlike the many other times he had taken me in this way, once I climaxed he continued to draw fluid from me. As he feed I began to feel weak, my legs buckled and I fell back onto a bed of leaves. Now barely able to think, I realized that he was taking too much from me, I was dying.

After being kept from me for three nights this newly turned Wurwolaka's hunger had caused him to come dangerously close to draining me. My nearly bloodless body had started to cool even before his mouth left my pale flesh. Laying almost buried in the leaves, I could hear my own heart beat. It seemed like hours between beats, all that I could hear was that pounding and the wind in my ears, roaring like a great storm. Darkness surrounded me and my mind flew over strange landscapes, death was upon me." Again Valantene fell silent, sitting still as a stone he stared into space.

After several minutes had passed Joshua became alarmed at his lover's silence and stillness. "Are you alright?" "You don't have to tell me anymore if you don't feel like it." Still getting no response, Joshua reached out to shake the white shoulder of his vampyric companion. As his hand touched the cool flesh, Valantene began to speak again.

"Everything slowed, I saw a leaf release from a branch far above my head. It floated ever so slowly away from the tree that bore it, every inch of its fall seemed to take an eternity. It danced on the wind forever, long before it reached the ground my vision dimmed and then all was blackness.

Time no longer existed for me, I lay in a netherworld of emptiness until I felt a burning in the core of my soul. My eyes suddenly were filled with light, I tried to cover them with my arms but could not move. The light became brighter and brighter until I thought I would explode with light. Then, in an instant the light was gone and I found myself sitting in the dark forest alone. I do not know how long I had lain there in the leaves, but I did not feel cold, nor could I see any sign of Lord Mihnea.

All seemed normal until I realized that I could see all the colors in the leaves and trees. Though it was clearly late in the night, I was able to see every color, even many I did not recognize. Rising from the ground, I felt unreal, as if I moved in a dream, all was new and more vivid than waking life. I looked down at my body and saw that it had become like alabaster, very pale and somewhat translucent. This could not be real, my mind was unable to make sense of what had happened. I went back to my home in hopes of going to bed and waking in the morning to find that all this had been but a dream.

To my surprise, as I approached the hut where my family lived I found I could not get closer than four or five feet from it. It was as if some force held me from my home. A barrier, invisible but so strong that nothing I could do allowed me to pass beyond it. I knew of talismans and spells that the elders used that could have a similar effect on those it was used against but what could do this to me?

Then I saw the garlic and Hawthorne boughs and it came to me, this was what held me from my home. This made no sense to me, I was not Wurwolaka! I did not feed on the blood of others! I had not died and come back! My mind would not believe that which must be true.

As the dawn approached a feeling of dread came upon me so strong that I was in a panic. I felt I must flee the rising sun but knew not where to hide. There were caves near our home where we kept our few cattle and goats. These would keep the sun from finding me, so I ran heedless of the branches and thorns that tore at my naked flesh, until I came to one of these caves. Throwing open the gate that blocked the entrance, I rushed into the depths of the cavern and finding a hollow far from the entrance just large enough for me to wedge into, I hid and soon slept the sleep of the dead.

I awoke at sunset. The strong odors of the animals filled my senses and for several moments I did not know where I was. As my mind cleared, I remembered all that had passed the night before and how I came to this place. I still would not believe that I had become a creature of the night.

Hunger clawed at me, I ached with the need for sustenance. Carefully I approached the camp fires of my village. Though we had stopped our travels and built huts, we still kept camp fires to cook large meals on and for dancing and storytelling. Hoping that some food might still be left in the pots which hung over the fires, I crept to the nearest of these. In the iron pots I found enough stew that could be scrapped out for a meal. I devoured the hot stew so quickly that my lips and mouth were burned by the nearly boiling food. Moments after swallowing the last of this my stomach rejected it and I fell to the ground retching. I soon found that any food I took in would not stay with me. My body rejected every ounce I consumed. I was starving, never had I felt such hunger or such frustration.

Posted by Tristan Alexander at 11:23 AM