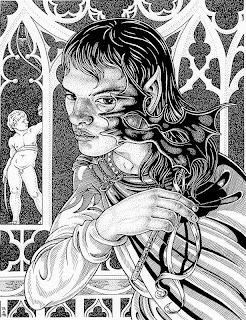 "Young one, I understand your fears but believe me, you are in no danger. You will not become as I by giving me your blood. Let me tell you more of my story."

"Many years after I found myself as I am now, I again met Lord Mihnea. I had traveled far and had learned much but I still knew nothing of how I had become a Vampyre. Having had many victims, I knew that my bite alone did not change a person.

It was the year 1700, in the city of Venice where I finally again encountered the man who had made me as I am. It was a warm July night and I was hunting in the Palazzo dei Procuratori. There are many side streets and areas of shadow so I had no trouble concealing myself when needed. I had discovered that this palazzo was frequented by boys of a certain kind who sought the affections of men and though this meant I had competition of a sort, it also meant easy prey. As I stood partially revealed in a doorway trying to attract the eye of a young noble who had just entered the square, I felt more than saw, a familiar presence. Looking around, I saw a tall pale figure only a few yards from me. Though he was dressed in the style of the times, he was still the same handsome, dark eyed Lord that had come to my village almost two hundred years before. It was Lord Mihnea.

Abandoning my intended prey, I moved with all speed to catch this man who had made me what I am. To the young noble who had just began to respond to my seduction it must have looked as if I simply vanished into thin air, so quick was my movement. I stood silently beside Lord Mihnea for several long minutes before he felt my presence and turned to look into my eyes. At first I thought he might flee from me. He took 2 steps as if to do so and then stood statue still, as still as only one of the undead can. A mix of puzzlement and sadness shown in his face.

I wished to ask so many things of this man who had changed my life to this dark unlife. My mouth could not form the words and my thoughts ran from one question to the next not knowing which to speak.

In my hesitation, he found voice. "You live!?"

This seemed a stupid thing to say yet I could hear his surprise and relief in those few words.

"Yes, I live, I know not how I came to be like this yet I live!" My voice sounded cold and flat to my ears. I projected an anger that I long ago thought forgotten.

"How could you survive so many years and not understand your nature?" He asked in an astonished tone.

"I understand my nature!" I snapped, "I do not understand how I became as I am. Your curse and mine now, does not infect others simply from the act of feeding, nor does death cause the change as far as I have seen. So HOW DID THIS HAPPEN TO ME?? WHAT MAGIC DID YOU USE TO MAKE ME THUS?!" I was screaming by the end and he looked as if I had struck him physically. Seeing his fear and pain I lost my anger and spoke again. "I just need to know how this curse of ours befell me, please?"

His eyes shone wetly as he told me of my mortal death and his terrible mistake.

It seems that, on that last night of my natural life, he had called me with his mind being desperate for my blood and unable to reach me physically. When I came to him in the woods his hunger caused him to take much more from me than I could safely lose. Only as I lay dying in the leaves did he realize what he had done. In desperation and panic, he slit one of his wrists and attempted to revive me by feeding me his blood. It seemed to have no effect and so feeling guilt and fear, he fled.

He left my village behind as quickly as he could and his fear of what he had done and confusion over what he had become caused him never to return to that part of the world again. It seemed that for all this time he had thought me dead and hated himself for it. Though most if not all of his other "human" feelings and failings disappeared over the long years, this one thing had continued to haunt him. What he had thought was his first kill was actually his first offsprings creation and it had taken all this time for him to know the truth of it.

Hearing this and seeing his reaction to my presence, I truly lost my anger with him. And yet it seemed to me that if all he said was true then my long life of darkness was an evil trick of fate and meaningless. I began to laugh. It was the laugh of a mad man, or should I say mad child. As my voice became louder than any mortals and echoed off the walls of the Palazzo, all those in the Palazzo and for many blocks away ran from the sound in blind terror. Some with fragile minds began to laugh the mad laugh with me. Only death silenced them. Lord Mihnea tried to block the sound from his ears but nothing could keep it from his hearing. Finally he seized me with all his preternatural strength and lifted me from the ground shaking me furiously until my laughter stilled.

"I am sorry! I am sorry!" was all he could say and then he fell to his knees before me and wept.

We stayed like that for several hours, the finely dressed Lord bowed before a nearly naked youth, his arms wrapped tightly around my legs, his tears staining my feet. The approaching Dawn finally ended this bizzare scene. Just before the sun rose, we agreed to meet again at dusk for we had much to talk about.

Once the sun had set the next day, I made preparations to again meet Lord Mihnea.
This being the season of Carnival in Venice, I decided it would be better for me to blend with the crowd and so have an easier time meeting my vampiric sire in public. I "acquired" a costume and mask and so, outrageously dressed, I passed virtually unnoticed through the crowds of humans.

Entering the Palazzo, I found it filled with revelers and dozens of other costumed celebrants. Using my heightened senses I finally found Lord Mihnea standing near the entrance to a dark ally. He was dressed in an elaborate costume looking much like a peacock.

Before him stood two youths, dressed in identical short tunics of blazing red and orange looking very flame like. At a distance it seemed that they wore white tights that showed off their firm young buttocks to best advantage. As I neared them, I realized that they were not wearing white tights at all. Open to everyones gaze was the magnificent view of the bare legs and ass of these twin boys.

As I came to stand beside Lord Mihnea I saw that both boys were in a haze of sexual pleasure. The finely dressed Lord was lovingly fondling the very stiff member of both boys. Looking into my eyes he nodded his head and turned the twin nearest me so that I might take over his pleasuring. In but a few strokes, it was clear that both boys were about to climax. Kneeling as one, we took the boys before us into our mouths and as we took their young seed we also fed on blood from their engorged manhood.

As their climax peaked, each boy fell into a deep sleep. Carefully we lifted our young benefactors and finding a secluded niche, lay them together to sleep till morning. We tried to arrange them so that if they were stumbled upon their natural charms would not entice anyone to take advantage of their venerability.

Now that we had feed, Lord Mihnea and I could casually stroll the walkways and discuss our dark lives. He told me many things about being Vampyre. Most that he said I had learned on my own over the years. He explained what he knew of our abilities and restrictions.

He could not explain why my ears had become pointed, though he believed that my own perceptions of what I was had caused this change. In the legends of my people, the Wurwolaka, the Vampyre have pointed ears as well as red eyes, pale skin and long fangs. Since my rebirth I had taken on all of these characteristics. Lord Mihnea had but a few. A slight red in the eyes, long fangs and a pallor, but not so pronounced as my own.

We agreed that there were surely more of our kind in the world and yet neither he nor I had ever met one. He had heard rumors of Vampyres in Paris or in the New World but he was not sure how reliable human gossip was. My sire was not truly interested in meeting others like himself. He was content to live through the ages alone.

After but a week we decided that our paths should part. I bid him farewell and I have not seen him sense that night, over 200 years ago.

It had taken three nights for Valantene to tell his tale. Joshua was less frightened of become a Vampyre now, but his mind was still uneasy about having one as a lover and living in his families basement.

Posted by Tristan Alexander at 10:21 AM