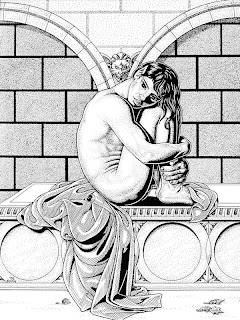 Light and dark, the play of shadow danced across the yards of the sleeping town.
The City Cemetery, dating back to the Civil War sat at the center of town surrounded now by homes of the living, homes newly built. One mausoleum built partially into a hill stood in all its
mournful marble glory looking down on the small, frail figure that now walked thru its doors. Above the door, in raised letters carved over a gothic circle, holding a winged hourglass was the
name "MILLER". The boy who now entered this tomb was not of that family. If this had been his true resting place it would have read "MADDRUSA", it was not his true resting place, just one of many he had temporarily used over the many years. He had found this one only a few nights ago and was pleased that one of the crypts was empty. Well, there was some dust that had been its inhabitant but that was better than those he sometimes found. Occupants never seemed to mind being evicted but those rotting corpses were never pleasant to move, or dispose of.

Letting his blue-black cloak fall from his shoulders and pool about him, the boy, now nude, sat motionless on the carved marble that would be his blanket. If there had been anyone to see this, they would have thought only that the tomb held an exquisite sculpture. For the body matched the marble in color and in lifelessness. Only the red eyes and long black hair seemed alive in this place of the dead. As the sun rose the winter cold blew through an empty, statueless mausoleum.

It had been 2 days since Joshua saw the strange face in his window. Most of the snow had melted and everything looked grey and barren. Dead trees reached into the grey clouded sky and under his feet mud and dead grass covered the ground. Out for a walk alone, Joshua found himself near the old cemetery. He had always like graveyards, the carved stones and mausoleums were beautiful to him. Others thought this was a morbid fascination but that wasn't it at all. The stones had life, they were works of art, things to be seen and touched.

As Joshua approached the gates to the cemetery he noticed that a funeral was going on. Several people in black stood near the new grave talking quietly. One of the people nearest him turned in
his direction and he recognized them as one of the Miller family. They lived just down the street from him, five or six houses away at the most. The death must have been sudden because he hadn't been aware of anyone in that family being ill lately. His mother surely would have mentioned it since she and Mrs. Miller were friends. He wondered who was in the grave.

It was nearly supper time so he left the cemetery behind him and headed home. He would have to ask his mother if she knew who the funeral was for.
Posted by Tristan Alexander at 10:20 AM